“Ever since the internet and social media there’s a  false sense of community when all you’re doing is so cial media. I had a really hard time finding a way to fit  in community outside of being on the streets. I don’t  want to mix my job with my personal life. I don’t want  to bring my work home. A lot of my friends, I haven’t  seen them in 10 or 20 years. I talk to them on Face book, sure, but out here on the streets there’s community, we can say hello and hug each other. I wasn’t  homeless for about 10 years and you wouldn’t hear  anybody say hello to you all day long. I had to force  myself to make a habit every morning to say hello to  people I was walking by on my way to work. I would  say “good morning” to them, mostly to the workers.  The people setting up the restaurants for the morning  or taking out the garbage from last night. I’d say good  morning and they’re cheerful and happy to say good  morning back. But that’s like the most interaction you  can get out of people, and it’s forced. I don’t feel so  forced in the community I live in right now.”

“When it comes to interactions with men in particular,  you have to be direct and upfront with what your intentions are with that person, especially if they make  advancements on you. You have to be firm in telling  them that you’re not OK with them, you know. You  can never ever, ever, ever have a gray area because  you want to be nice. You need to just tell them. But  the biggest concern is when I’m sleeping alone. I’ve  had men try and come in my tent a couple of times.  Thankfully I woke up to my dog chasing them out but  if he hadn’t been there, I’d of woke up with a man in  my tent, and who knows what he’d have been doing.  I’ve got friends who tell me that they’ve woken up with  men and the first thing he does is offer them dope, or  drugs, and some of them accept it because they don’t  know what he was doing before they woke up. It’s terrible. Yeah, so sexual exploitation, and ah, …. the violence. It can be really dangerous for a woman.” 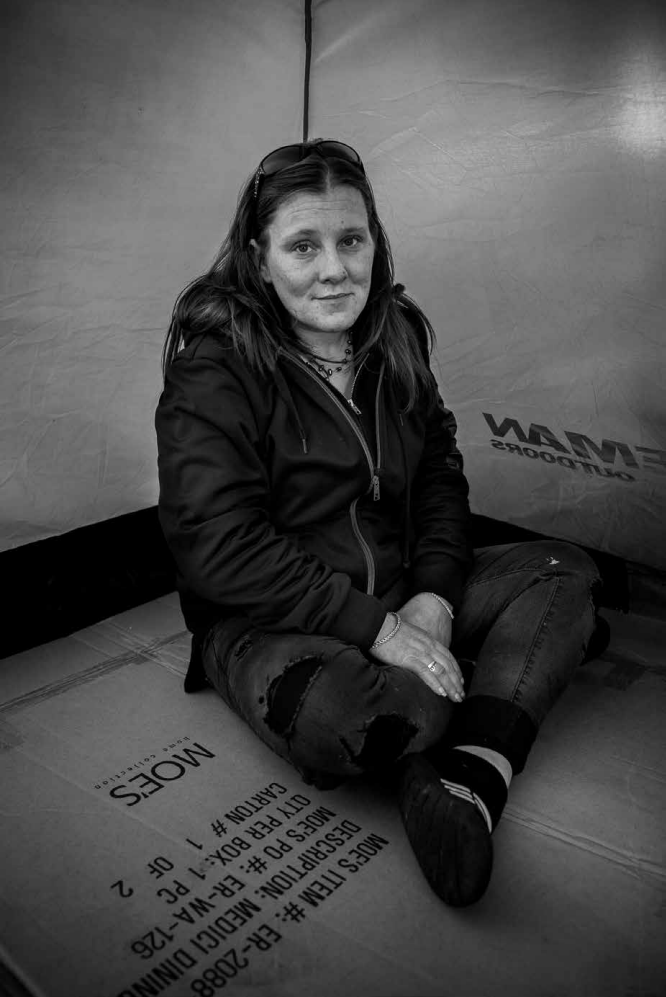 “I lost my low-income housing voucher and  had to go back to the streets after 10 years of  not being homeless, three years ago. It was  devastating and terrifying sleeping in the Tenderloin on the sidewalk. You know life doesn’t stop  just because you lost your housing. I was completely sober, the first time off all opiates in my  adult life, and to find myself right back to being  homeless was crazy. I remember thinking, “I  can only go up from here, it can’t get any worse  than this”. It got worse; my boyfriend went to  jail. So now I’m completely alone and on the  streets without that safety and protection to  sleep with me every night. But the most devastating part of it was it pulled me and my daughter into homelessness. We were homeless from  age 2. We became homeless until she was 4. I  got us out of homelessness, and that was like  the hardest thing I’ve had to do in my life. To  go through services and that whole thing, it  was like the hardest thing ever. And so when  I lost my housing ten years later I couldn’t put  her back into that. I didn’t have the heart to  go back to Hamilton and drag her through the  uncertainty of homelessness, I had to leave her  with my mom. At least there’s stability there,  there’s structure, to some degree. My mom  works every day, and it was better than putting  her back through the uncertainty of homelessness, so that’s what I did. That was like the  hardest.”

“I feel like there are a lot of people that want to  help us get off the streets and there are promises made,. They’re given to you like a promise  when it should have been presented to you  like a hope. That’s devastating when you think  something is going to work out and it was never  on the table in the first place.”