The Coalition on Homelessness and the shelter client advocates, who advocate for shelter residents who have been evicted or denied a service, have begun to introduce restorative practices to the City-funded shelters. Restorative practices encompass restorative justice, which employs methods of community building and conflict resolution that have been successfully used in indigenous cultures all over the earth for thousands of years. Currently, the San Francisco and Oakland Unified School Districts as well as many other school districts across the country make use of restorative tools. As the International Institute of Restorative Practices (IIRP) indicates, “Restorative practice builds healthy communities, increases social capital, reduces the impact of crime, decreases antisocial behavior, repairs harm, and restores relationships.”

When doing outreach at shelter community meetings, we have begun to employ, whenever possible and practical, the use of restorative circles. We gather everyone around into a circle. The more we can actually approach sitting in a true circle, with either residents only, or residents and staff, the more powerful the circle is. A talking piece is employed, and only the person holding the talking piece is permitted to speak. Everyone answers the same question or questions. We will often ask folks to name one thing they appreciate about the shelter, one thing that needs improvement, and one thing each of them can do to make it a better place to be.

No one is required to speak, although they all must hold the talking piece, if only to say they pass. We always endeavor to go around the circle at least twice, as we invariably find that many folks who pass the first time will feel more comfortable in speaking the second time around, and/or they want to echo and elaborate on something someone else has said, or, since they passed the talking piece, the discussion has stimulated other ideas they want to share. We always write down people’s responses without identifying those who conveyed them.

As the IIRP points out, circles create equality in that they allow each person to be heard so that no one person or persons can dominate the discussion, safety and trust, and responsibility. “In a circle, everyone can look each other in the eyes so nothing is hidden.” Everyone has the ability to play a part in the outcome of the circle, creating ownership: Folks in the circle feel that together they have full claim to the process facilitation; the leader is reminded to be neutral instead of imposing their own opinions and connections. People have the opportunity to be heard and be better understood by others, as well as to better understand where other folks are coming from. 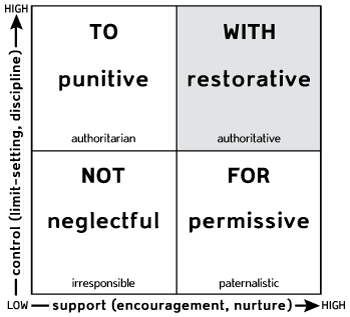 The shelter client advocates have, on several occasions, facilitated or participated in circles in which clients work to repair the harm they have done to other shelter residents and/or staff. In this kind of circle, different questions are asked of the person doing the harming and those who were harmed by the action or actions. Here are two series of questions that might be asked of the person who holds the talking piece.

Response to challenging behavior: What happened? What were you thinking at the time? What have you thought about since? Who has been affected by what you have done? In what ways? What do you think you need to do to make things right?

To help those harmed by other’s actions:What did you think when you realized what had happened? What impact has this incident had on you & others? What has been the hardest thing for you? What do think needs to happen to make things right?

In order for this type of circle to yield positive results, the person or persons who did the harm must take some ownership of their actions, and those who experienced harm must be willing to actively listen to what the person(s) who harmed them has to say. If these two things occur, the potential for understanding, forgiveness and healing on both sides is very real.

One of the larger aims of this work we are undertaking is to demonstrate the effectiveness of circles, and have both shelter residents and shelter staff adopt these practices as tools for community building and eventually, as a tool for conflict resolution as well.

In addition, bringing circles to shelter community meetings informs the work of the Coalition On Homelessness; that is, the Coalition is an organization of largely homeless and formerly homeless people one of whose aims it is is to give voice to the concerns and needs of people who are themselves currently homeless. And we believe that all voices of houseless folks are important. To the extent that we are able to foster those voices being heard, acknowledged, and communicated to the programs they are engaged with, the general public, and to the policymakers who are responsible for ensuring their highest possible well being, the more successful we are in determining that the Coalition is of, by, and for the people who currently are unhoused.

“The fundamental premise of restorative practices is that people are happier, more cooperative and productive, and more likely to make positive changes when those in authority do things with them, as opposed to to them or for them.”